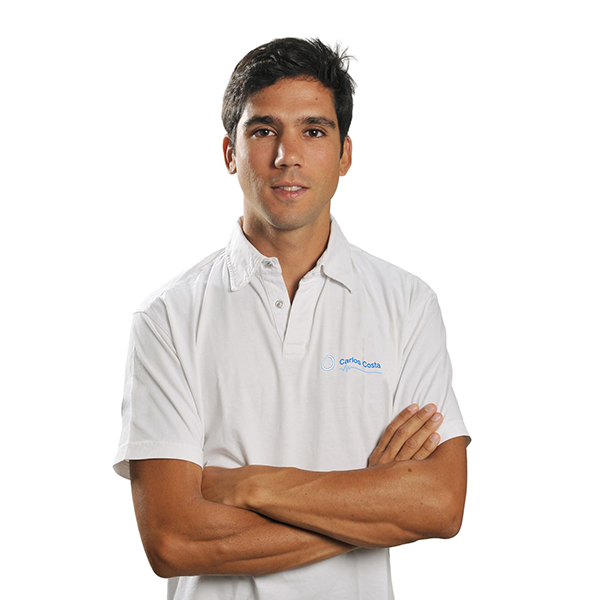 Carlos Costa’s name may not sound familiar, but this young Portuguese man, born on September 10 1986 and often called Charlie, is one of the most coveted physiotherapists, a career he embraced by chance.

From an early age he has been connected with sports, an area that has always been part of his life and fascinated him. He started his sportive practice with swimming and competed at a high level. Besides that he played soccer and tennis, did mountain biking, hiking and bodyboarding.

Because of his passion for sports and arts, Carlos Costa has found in physiotherapy a way to work with different athletes, from hockey to basketball and soccer, from swimming to windsurfing, surfing and bodyboarding. Then somewhat unexpectedly tennis appeared in his life when he was invited by a former ATP physiotherapist to work with him. Due to his good professional performance, opportunities arose and led him to work with tennis players on the Tour.

Despite his young age, Carlos is currently working for the Portuguese national teams at Davis Cup and Fed Cup and already has an enviable CV which includes the former number one, Ana Ivanovic, and more recently the former number 2, Tommy Haas, for the third consecutive year. Simultaneously, he has also been the physiotherapist at the MercedezCup in Stuttgart, and was responsible for the rehabilitation of other players like Tomas Berdych, Frantisek Cermak, Karol Beck, Andre Begeman and João Sousa, among others.

Carlos Costa has turned sports into his professional guidelines. He did an internship in Sports Medicine while taking a degree in Physiotherapy, worked in Fitness to improve physical exercises, apart from having completed a Postgraduation in Traditional Chinese Medicine and Structural Osteopathy, which complements his knowledge and increases the diversity of the methods/techniques he has been using so far.

Although he assures that his daily life is similar to anyone else’s, travelling very often and taking care of elite athletes is a highly demanding and challenging job, day after day.

About the future, Carlos Costa says “I try to achieve each goal at the right time” and “what moves me primarily, is the success of the athlete that I’m working for. And obviously, I will be very happy if they win, because that’s the result of great effort and professional dedication”.

It is a healthcare profession dedicated to working with people to identify and maximize their ability to move and function throughout their life.

It is a general state of health and well-being trough correct nutrition, exercise, hygiene and rest to perform physical activity.

It describes the diagnosis and treatment of dysfunctions in the musculoskeletal system – Structure.

It is a range of medicine practices based on an ancient tradition which is more than 2.000 years old.

here are some of my best moments